Georgia On Our Minds!

The roads to Florida are rife with bumps, cranks, cracks, and jumps.

While RVing across the United States we often need a break from being thrown into the air by unkept interstate highways that have been abandoned by governments. Georgia offered us some interesting sites to investigate and rest our aching muscles.

I spent almost every summer of my childhood visiting Aunt Thelma in Rossville, Georgia. We would visit mama’s folks in Pine Knot and Williamsburg, Kentucky and then head south to visit my father’s relatives in Soddy-Daisy, Tennessee and Georgia. This annual trek lasted until my mother died about 10 years ago.

Visit Etowah Mounds (Not far from my dad’s people.)

We have vacationed in Georgia many times but never knew there were so many interesting historical sites. Here is a brochure that will show you the way: https://gastateparks.org/online-travel-guide

One of the several mounds at the site.

Etowah Indian mounds was our first stop. (They were huge! Six stories high!) While studying underwater archaeology, I discovered that there were shell mounds all over Florida and the world. Then, after visiting Cahokia Mounds right outside St. Louis, I found that mounds are also found throughout the United States.

Artist’s conception of the mound city.

Fascinating aspects of this archaeological site were that there was a moat/canal around the whole village.  And right above the moat the indigenous people  built a wooden fence. Look at the drawing above.  Etowah was built on a river and the people dug canals so that the water would move around the complex.

Notice at the top of the painting that there are small holding ponds and people residing outside of the main compound. The moat and small lakes are still visible today along with the canal they dug to divert water. What an engineering feat of people who lived over 2,000 years ago! (The mounds were constructed around 1000 CE.)  This canal/moat would provide close access to water, but more than that, it could flush away human waste.  The following link adds additional material about the mounds: https://lostworlds.org/etowah_mounds/

Photo of the canal that still exists today.

The stylized art was similar to Poverty Point. And they both considered  copper to be a precious metal.

I discovered Etowah while studying artwork at Poverty Point Indian Mounds in Louisiana. Poverty Point is at the top of my list to visit  on our way home in May.  Some of the finds were similar.   Two sculptures were also found in a pit below one of the mounds at Etowah. 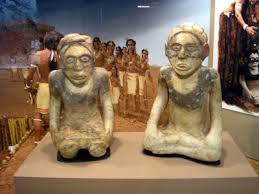 This is not a happy couple. They remind me of finds in ancient Sumer almost 6,000 years ago. 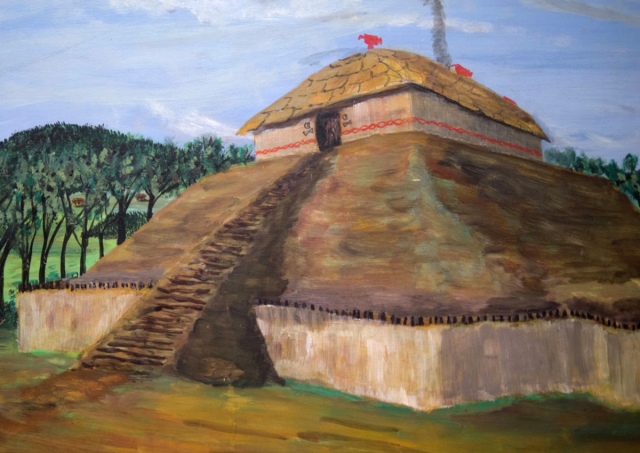 Houses or public buildings were erected on the top of the mounds. It must have been awesome!

This site was abandoned around 1550 CE, about the time of the Spanish invasion.  Who knows if the Spaniards killed and looted the site or the people died of smallpox/other diseases?  Several burials were found beneath a mound. Like almost every other archaeological site, people had looted the mounds before the archaeologists arrived.   It was a rewarding day to walk around the site, think about the people who lived here so long ago,  and explore the moat/canal and mounds.  The museum tells its story quite well.  Visit it someday, if you can! 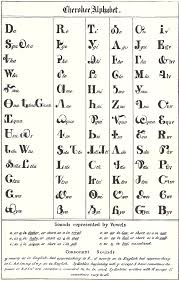 Here is a copy of their alphabet.

Tom and I have visited Sequoyah’s cabin  in Oklahoma.  It is odd that the tourist site never mentioned that he lived in Tennessee, (near my father’s home), and then moved to New Echota.

Sequoyah created an alphabet for the Cherokees.  In New Echota they printed a newspaper in both English and Cherokee. (My brother told me that there is a tourist center featuring Sequoyah along I75. The Eastern Band of the Cherokees claim it is his birthplace.)

The Cherokees dominated land throughout the South and Eastern Atlantic coast.  Eventually they lost it while battling the Europeans who thought they deserved their land.  Remember that mythological belief of “Manifest Destiny?”

Building where they printed the Cherokee newspaper. 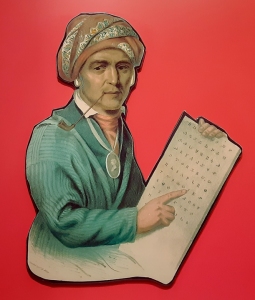 Having lost parcels of their land,  Cherokees decided to create a capital that was approved by the U.S. Supreme Court.  This meant that they could govern themselves apart from the United States.  They were their own state, so to speak!

I was very interested in New Echota because my grandmother Selvidge was Cherokee.  This makes me one-quarter Cherokee.  While I have not lived in a Cherokee community, both my mother’s family and my dad’s family lived on and near Cherokee land.  When I researched how the Cherokees lived, it was the same as my parents.  Selvidges are listed in the book of Cherokees in Oklahoma and were makers of long-rifles.

This was my favorite home. The only one that was not torn down. Hand-built by Samuel Worcester, a congregational minister in New Echota who followed the Cherokees to Oklahoma. 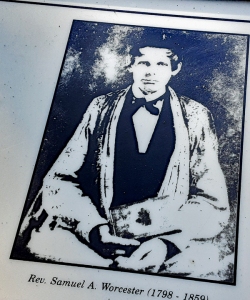 Worcester loved  the Cherokees. He helped in the printing office and translated for them.

People began to build homes in New Echota.  The well-organized town even had its own court-house and tavern.

Light-skinned people did not like the success that they saw in this little town.  Someone said that they found gold near New Echota.  The Cherokees took the case of ownership to the U.S. Supreme Court and won but Georgia decided it was time for them to leave. Georgia declared all contracts with the Cherokees to be null and void.  Light-skinned people overran their lands.

The President of the United States and the military drove the people off of their land.  Here is a quote from History.com: “President Martin Van Buren sent General Winfield Scott and 7,000 soldiers to expedite the removal process. Scott and his troops forced the Cherokee into stockades at bayonet point while whites looted their homes and belongings. Then, they marched the Indians more than 1,200 miles to Indian Territory.”  They forced them to walk to Oklahoma.  This began what is known as the “Trail of Tears.”  Many Cherokees died on the way. 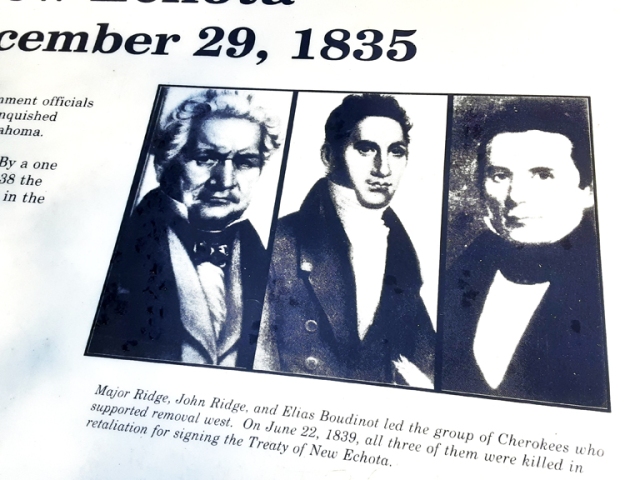 Three wealthy Cherokees (Notice, they are wearing clothing.) knew that the Georgia government was going to take their city and destroy it.  One night they made a deal to sell New Echota to the Federal Government for $5 million dollars plus receive all of the land that is now Oklahoma.  (They did not know that other indigenous peoples were living in Oklahoma.) Those men were executed.  Who received the $5 million?  Most of the other Cherokees wanted to stay at New Echota, so the business men were probably killed by them?  Who knows?

Very quickly, Georgia platted the land and gave it away to light-skinned people so they could find the gold? Wonder if they killed any of the Cherokees?  They tore down almost everything they found in New Echota.

The Beauty of Indigenous Peoples

We have visited hundreds of indigenous archaeological sites all over the United States.  It never fails to amaze me that educated people almost always portray the indigenous as scantily clothed.  It seems that they all bought their loincloths from the same tailor. I love it when I discover portraits of early indigenous peoples  that do not show every part of their body.  The following portraits, with several others, were on a wall at the New Echota museum.  Gorgeous! 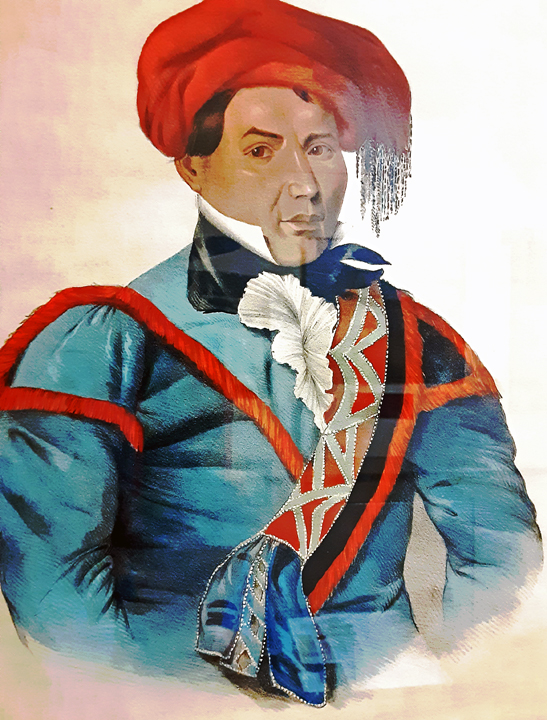 Unknown at this moment!

Last thought. Can you read the Cherokee name for Women?

Hope you have all survived the election and Covid.  My next blog will explore the return to our southern home in Florida.

Thanks to the images I found on the net to use in this blog.  I am truly grateful for the talent and work of others.

Be safe and sane, if you can!

This entry was posted in Uncategorized and tagged Cherokees, Etowah, Georgia, New Echota, prejudice, Trail of Tears. Bookmark the permalink.