Hunkered Down in Cass County, Missouri

Enjoying our space in Florida!

Twenty-eight-degree weather welcomed us home.  We shivered and are still shivering.  Last spring, we spent about three months in the south and did not experience adversity because of the change in weather.  We adjusted.  After six months in Florida, we are still trying to wear our flipflops and shorts, and we are freezing! Where are my boots?

Leaving Florida was Painful.  Politics and Ignorance pushed Us!

We came home early.  It was not what we had planned.  But … Gov. DeSantis kept making lethal mistakes regarding the virus. A quick check shows almost 30,000 cases and 900 deaths today.  In the beginning, no one was being tested.  To be accurate there are probably thousands of cases that went by the wayside.  We have a friend who had the virus and locals would not test her.

Politics and the Health Crisis

DeSantis is and was more concerned with finances than funerals.  He allowed students to storm the southern beaches of Florida and this is exactly where the epicenter continues to grow. In a knee-jerk decision he closed the borders from Louisiana and to people traveling from the Northeast. Then, he banned rentals of vacation properties.  He forgot that half of the people living on the Florida coast are from the Northeast and have homes in Florida.  So TGO (The Great Outdoors RV Resort) had an influx of East Coast people that we had not seen all winter!  Shuttered windows on houses opened and the streets filled with people as the virus exploded in New York.

DeSantis is and was pressed to open Florida because the unemployment system crashed and has only served about 15% of those out of work. (Thousands and thousands of people have been furloughed by Disney and other entertainment venues.)   Today they reported that one million people had filed.  The unemployment system was designed to fail because the last governor, Rick Scott, (as I read) wanted to taut his ability to keep people working by making it very difficult to apply for unemployment insurance.  It was to be a star on his forehead.  Now, the sky is and was falling on DeSantis and no one can fix the system.  We figured that Covid was coming for us soon!

A great highlight in our lives was volunteering at the Refuge.  Sadness stalked us as we left.  We were both at high risk because of serving so many visiting internationals from the Space Center.  I figured that Covid was going to knock on our door, but thankfully, it has not visited us.  (Or, are we carriers?) With our work schedule gone, we were stuck at TGO for most of the day. 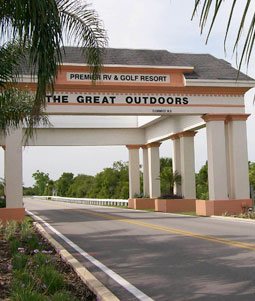 TGO is a close-knit community.  Socializing is an art.  Many think that all they need in life is found at TGO.  (Restaurants, golf course, swimming pools, tennis, games, Nature Center, special events, and a scads of clubs.) So, everyone talks to everyone all hours of the day. (hyperbole)  If you would like to see some of the activities of TGO, I am inserting a link to the bi-monthly magazine, here!

TGO residents protested when the community church cancelled all activities.  In spite of the mandatory shut-down, the church kept holding meetings in their parking lot and in people’s homes.  I argued on Facebook that the virus was airborne, but the elect paid no attention to the science of the virus.  Unforgivably, they pretended that it did not exist. “The blood of Jesus was going to protect them,” is a quote I recently heard on TV.   This really scared us.  And the virus did come to TGO!  Next, there were rumors that the two couples who live on our street had been stranded on a Princess virus ship.  They were coming home. They are our neighbors. (I mentioned this in my last blog.) 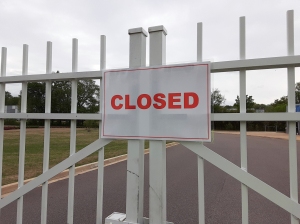 We also heard that governors were shutting down public campgrounds and some states were closing  private ones. (Our favorite campgrounds were closed.)  We were afraid that we would have no place to park during our four-day trek home.  We were afraid that we would not make it back to Missouri. We had to leave.  It took two days to pack. We left, hoping that we would not be quarantined along the way. One campground threatened to quarantine us 14 days if we stayed with them. (Friends across the street at TGO have a home in Alaska and cannot leave.  The border to Canada is closed.)

The Lonely Trek to Cass County

I took this photo in Alabama because the trees were so lovely. The roads were nearly empty.

The green grass and Palm trees gave way to an open road with some rest areas closed.  And, (believe it or not) rest areas on interstates cannot be found in some states.  This is very dangerous for everyone.  Trucks end up parking on exits and along the interstate in order to take breaks.  Very few automobiles ventured on the interstates we drove. There were trucks in front of us, in back of us, and very close beside us on every highway.

There were three of these trailers in this park. I had never seen them before. I wondered if they had been in a junk yard.

After considerable research, Tom located places for us to park overnight.  When we arrived, two or three of them had electrical problems.  At one place, we had to move twice in order to find a site that worked.  People stole the breakers out of the units.  It is disheartening to see how people live in these less-than-trailer parks. 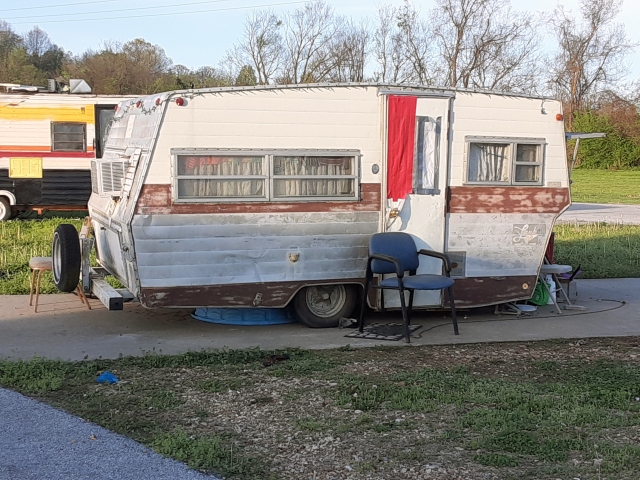 I saw a young man washing dishes in this trailer. He even owns a dog.

We called ahead and paid by credit card so that we would not have to meet or talk with anyone.  Of course, this did not work all of the time.  The places where we stayed were permanent residences for a host of the families.  We saw very few RV’s or motorhomes on the road and only one or two other transients like us in the campgrounds.

I think a lot of veterans find their way to campgrounds.

Graceland has Lost its Grace (One of our Stops)

We have vacationed at the Graceland campground many times.  It has always been a stellar event. This time was different.  Heartbreak hotel had been demolished along with all the shops along Elvis Presley Boulevard. (It is a very ugly space now.) Even the planes looked shoddy. Lisa Marie should cry!

In front of Graceland.

A new Las Vegas-type hotel reaches to the sky across from the campground.  Elvis shops can only be found in a hidden mall.  What used to be a pristine location has now lost its shine.  Fences were rusted.  Sidewalks were dirty.  Homeless people dotted the landscape.  It did not have the air of a inviting place to visit any longer.  Flags bearing the King’s image were torn.  And, … the campground was virtually empty.  We could understand that people stayed home because of the virus, but the campground itself was in disrepair.

A faded and torn Elvis. 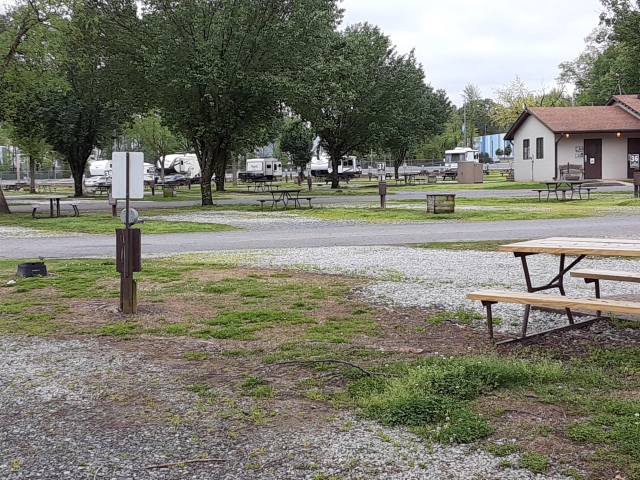 The only campers here were permanent.

Gas on the Road

Our last stop was at the Flying J along I49.  I was shocked to see that no one at the station wore gloves or masks.  I asked the cashier if she knew there was a pandemic?  She just stared at me. I told her that it was coming to her part of the world soon.  I don’t think she understood me!