Grocery Gridlock and a Few Alternatives!

It may not be a happy for some who are very close to you!

Some might be tired of eating the same thing over and over and over again.  Some may not have the time or energy to plan a big bash! Some might live in a very small space that would not accommodate a crowd.  Some might be Native Americans who know what happened to them after they fed the new settlers.  It is a day of mourning for them.  (How about all the fires, floods, hurricanes, killings, diseases, and general verbal abuse on social media that we experience?)

If someone is thinking of escaping a traditional Thanksgiving encounter, please consider a few alternative experiences that might fill the void during that week.

Dine with the Serbs!

Every year on the Saturday before Thanksgiving the ladies at St. George organize a Serbian festival.  Have you ever visited Serbia?  No?  Yes?  We have.  Well, this is your chance to experience American Serbian culture without purchasing an airline ticket.  You don’t have to purchase a single thing at the festival.  You can join the crowds, music, and fun for free!

There is singing, dancing, lots of food, Serbian jewelry, clothing, and canned food (etc.). You can buy raffle tickets for just about everything.  A roulette wheel was swirling endlessly as seated spectators bought scores of tickets. (It was like a party in the Colosseum in Rome.) How would you like to purchase/win a fifth of Scotch for a $1.00?

What would you order?

St. George Church is beyond beautiful.  I could sit in a pew and gaze at the Iconostasis (image stand) (front of the church) and striking stained glass images in the windows for hours.  It is a peaceful place to sit while the rest of the world is partying.  A sign says that only 150 people can visit at a time.  So there is room for you, if you need a break from the festivities!

A stern figure, I believe?

Children’s Dance Group in front of the Iconostasis!

Brandon Hudspeth of Levee Town at Knuckleheads. He can sure burn up a guitar!

On Saturdays and Sundays, Knucklehead’s offers free Jam Sessions featuring local musicians.  We heard Levee Town on Sunday.  They were funny and talented.  For a few hours groups take their turns playing for an appreciative audience.  Knucklehead’s also offers its brand of religion on Wednesdays with Carl Butler’s Gospel Lounge (Free).  There won’t be an altar call, just good old- fashioned gospel singing and music!

BB’s Lawnside BBQ loves to open its doors to new people.  On Wednesday evenings and Saturday afternoons there is “no cover charge.”  You can just come in and sit down, order a drink (soft or hard), and enjoy the tunes (for free).

If you enjoy sunshine–take a break and head north to the Wildlife Refuge. We did on Thanksgiving day.  We packed a lunch for us and the canines and made the trek.  At a break in Platte City (The girls needed to potty.) the parking lot of McDonald’s was full and more than 20 people were working.  One cashier had been there since 3:30 a.m.

Loess Bluffs is about 100 miles north of Kansas City off I29 and near Mound City.  We had heard about this place from a Kansas City reporter.  He takes his family to the Refuge every Thanksgiving.  That sounded interesting to us! And when we arrived, we discovered scores of people doing the same thing!

The Wildlife Refuge is amazing!  There is a 10 mile circle that will lead you to the promised land!  I have been to four countries in Africa witnessing huge flocks of birds, but I have never seen anything like the Snow Geese at Loess Bluffs.  Tom took videos.   I cannot load them into WordPress but I will point you to where you can view similar videos. FACEBOOK ALLOWED ME TO ADD ONE OF TOM’S VIDEOS.  IF YOU ARE INTERESTED, GO TO MARLA J. SELVIDGE’S FACEBOOK PAGE AND FIND THE LAST IMAGE!!

We parked the car and looked out over the pond straight ahead of us.  There was something white in the water?  What?  As we looked closer, it was millions of birds.

We did not really know what all of this was! 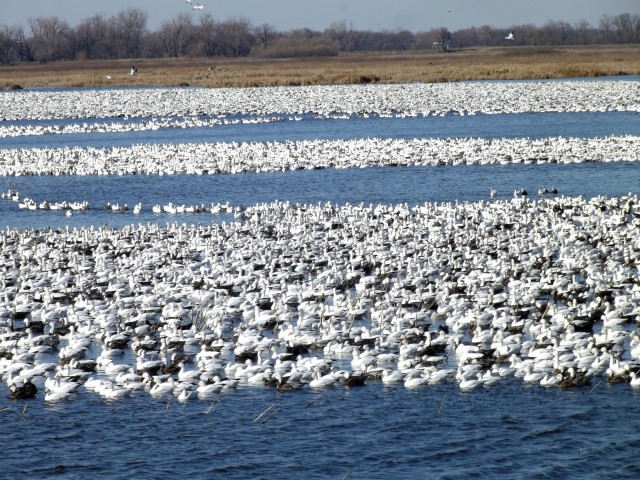 Here is another view!

They were moving.  And all of a sudden the sky turned black as they began to fly!

This was beyond awesome!

Here is another photo!  The sound was deafening!

They flew from pond to pond while we hung out at the Refuge!

This is an amazing place.  We saw eagles, Blue Herons, Canadians, all sorts of ducks, and a hundred other birds that we could not name!  We also saw scores of Muskrat houses.  I have seen reproductions of ancient Native American homes that look very similar. Wonder if  they learned the technique from the Muskrats? 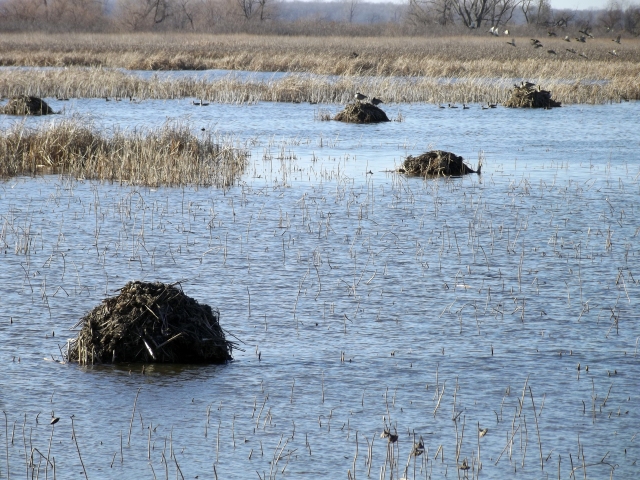 The swans were gorgeous and they lived in all of the ponds we visited!

Loess Bluffs has a website and all sorts of information for you.  When you arrive, you can pick up an auto tour guide.  It was very helpful.  All of the videos have stunning shots of the birds and wildlife.  Go to the second video to see the birds in action. Here is the link!

Here is a link to the auto tour and map!  Superb!

Maybe we will meet you there next Thanksgiving!

Last Moment!  Did they forecast a hurricane or winter storm?

The Saturday before Thanksgiving I stopped to pick up a few things at a grocery store. Upon entering the store, there was total chaos.  People clogged the aisles!  I did not have a cart and could hardly make it down the aisles.  Lots of items were sold out!  When I went to check out, there were 20 or more people in line at the self-check-out.  It was overwhelming!  Every year I am shocked at the gridlock that we experience in the stores and on the roads.  One year, up in Independence, there were so many people on the roads that not one car could move at the I70 and 291 intersection!

There was no gridlock at Loess Bluffs National Wildlife Refuge!

Tom and I are off to St. Croix soon.  I will send up smoke signals as we explore the island once again.  We are looking forward to the Christmas boat parade that happens every year!

This entry was posted in Uncategorized. Bookmark the permalink.