Caution!  Scream!  Scream! Screech!  KaPow! There may be history ahead! Tread lightly, it could be boring for some!

Fort Kearny State Historical Park (Click on the name of the fort for their website.) in Nebraska opened our eyes to the amount of land a Fort could acquire.  Today’s historical park is only 40 acres but the original was hundreds of acres.  We might think of personnel on a Fort as being ready warriors heading into battle.  Ft. Kearny was more like a Holiday Inn and Wal-Mart for the over 400,000 travelers making their way west than a site for staging war.  It was a welcome stop along the road where trekkers could refresh themselves on the Oregon Trail.

Most of the buildings consisted of dirt (called sod or adobe) and a few were built with logs.  The 500 or so soldiers who inhabited these shabby structures were poorly dressed and dirty according to one traveler. Kearney lasted only a few years, 1848-1971, and then was sold to the locals.  Its wood was appropriated in order to construct other forts further west.  One author claimed that they sent Buffalo Soldiers (African-Americans) to dismantle it.

Today, only one building has been re-created, the blacksmith shop.  The visitor’s center displays artifacts found at several archaeological sites on the property.

Crossing over into Wyoming, we discovered Fort Laramie proudly sitting next to the beautiful Laramie River.  Like Kearney, it had no walls.  As we walked the reconstruction site, it felt as if we were in a grand western town.

Fort Laramie  (click to go to the site.) began as a fur and buffalo trade depot in 1834.  The military purchased the site in 1849 and created the Fort.  Again, it was a place for trekkers along the Oregon Trail to rest and purchase supplies.  It also was abandoned around 1890. 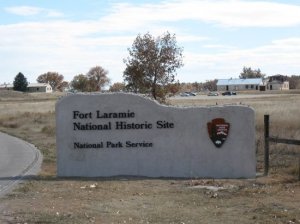 Great living quarters  for the officer in charge!

All of the buildings that have been reconstructed are painstakingly outfitted with materials from the mid-nineteenth century.  It was so instructional! Signs in front of each building informed us about how it was used.

The lower floor was the jail!

The guardhouse was particularly interesting to me.  Supposedly, when the soldiers were paid, they often would end up in jail due to drinking and fighting with each other.  Over 40 men could be placed in confinement in one basement that did not seem to be bigger than 30 by 20 feet.  They ate, drank, and defecated in the same room.  I have seen rooms like this in Cambodia where the Khmer Rouge kept people in confinement.  It was a shock!  A new guardhouse was created later due to health issues.  No kidding! 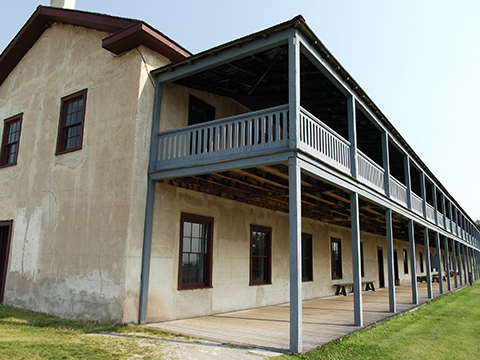 The Barracks were very well done!

The kiosks also described the boring and lonely life of a soldier.  They had very little outside stimulation and were stuck living in a harsh landscape with not much to do but to practice soldiering.  They missed the amenities of their homes back east. At least 33% deserted.  According to some accounts, there were people living outside the fort who traded with the travelers too.  Relationships with the locals is rarely mentioned in the forts we visited.

Inside the barracks. You can almost see the men living here.

Fort Laramie is a stunning example of western history.  It was here that over 10,000 Native Americans came to discuss treaties.  In one room of the reconstructed barracks, copies of dozens and dozens of treaties made with the local Native Americans were free for the taking.

How do I capture the diversity of all of the tribes? I can’t!

The U.S. government made a concerted effort to listen to the indigenous peoples and for a time the outcome was peace.  It was only after Native Americans reacted to the destruction of their homelands that the fort was used to launch strikes against them in order to protect the trekkers going west.  They even built iron bridges across the river to facilitate the war. 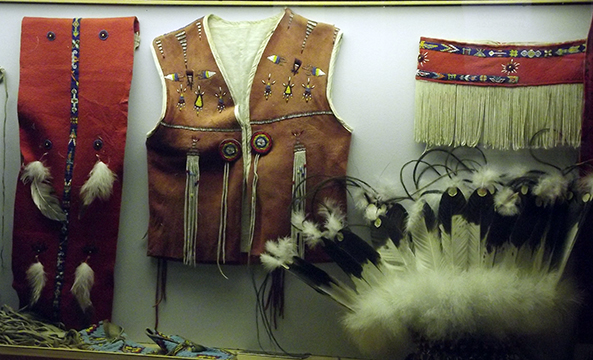 Such artistry by Native Americans!

In 1867 The Indian Peace Commission was established.  The Sioux, Crow, Northern Cheyenne, and Northern Arapaho negotiated for peace.  I picked up a copy of one treaty to share with you.  Here is how it goes, Treaty With The Yankton Sioux, 1858. The names of the 16 chiefs who signed the agreement are at the top of the treaty.

“The said chiefs and delegates of said tribes of Indians do hereby cede and relinquish to the United States all the lands now owned, possessed, or claimed by them, wherever situated, except ….” (There were exceptions to certain plots of land.)

In exchange for the ceding of land, the U.S. was to protect them, and pay them one million and six hundred thousand dollars over ten years, plus other sums of money.  The U.S. was also to build schools, and educate and train Native Americans and more!  The U.S. Congress did not ratify many of these contracts and so the terms were not kept, but the U.S. obtained the land anyways.

Ft. Casper was not built to last very long!

The last fort we visited in Wyoming was Fort Casper.  (Click on Fort Casper.) It lies on the edge of Casper, Wyoming.  This fort was built with logs.  The buildings are small with low ceilings.  One structure was built for horses, and then several other structures were added using the previous wall, like duplexes added to each other. They housed the laundry, officer’s quarters, barracks, and trading post. 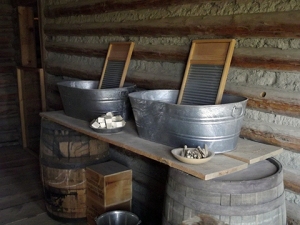 Fort Casper manned a bridge crossing the North Platte River and collected the tolls.  Army personnel were stationed here to protect a Pony Express outpost and the Telegraph from 1861-1867. 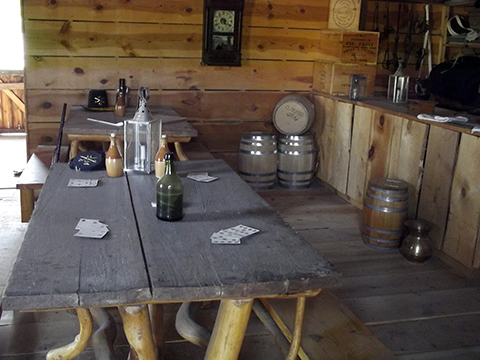 This looks good to me!

All of the Forts serve as a bridge to the past for tourists.  Sometimes they encourage you to touch artifacts but most of the time the stories are told behind glass.

They take you back to a time that you might not know or have forgotten.  This was our country and our people and the forts become a visible link to the conflicts, culture, and values of those who settled the west.  It takes your breath away!

And it strongly reminds us, with the exception of Native Americans, that we are all immigrants!

Below is a photo of some friends who were dining just outside our RV! 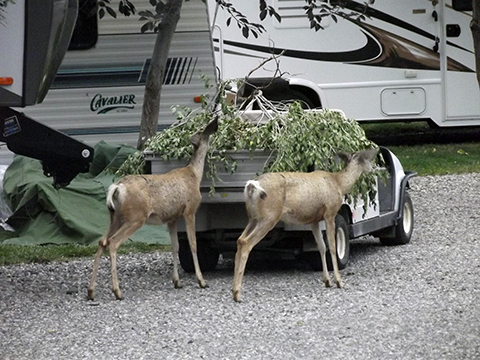