Arrow Rock…Rocks! But does not Explode!

To Escape the Fireworks Head to Arrow Rock! 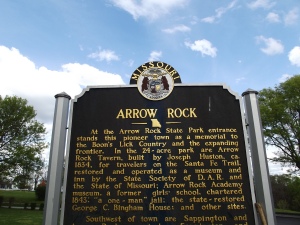 About one year ago, I created a blog about Arrow Rock.  We were about to launch our southern extravaganza trip and this was our first stop.  Today I am combining some of that data with a new twist on Arrow Rock.

Arrow Rock is one of the first places we took our 24′ Fleetwood many years ago.  It is both a National and State Park or Monument or whatever! And a great place to spend a weekend!  There is plenty of space for camping with 30/50 hookups!

Arrow Rock was ready for the holiday! But the shops were closed!

Unlike a year ago, when we set up our site at sleepy Arrow Rock, this time the town was teeming with tourists.  They were waiting in line to chow down at J. Huston’s Tavern and then on to a play at the Lyceum.  Yet our cellphones would not work and most of the shops were closed. We thought we had entered the Twilight Zone!

Such a lively place!

Arrow Rock is located on the Blackwater River and riverboats used to stop by with loads of good stuff to purchase.  And before it became a town it was a place where Native Americans carved out their flint arrow heads! Their biggest problem was malaria-carrying mosquitos.  A local, Dr. Sappington,  invented quinine which became the malaria-drug and saved the day.

One of the best things about Arrow Rock is the fried chicken dinners served at the Tavern.  This year we spent two lunches at the Tavern and certainly gained a few pounds.

While camping at Arrow Rock we took our bicycles for a tour of the town and stretched the ride on the second day to the Arrow Rock Cemetery and beyond.

Here is Tom showing off his bicycle!

The oldest grave we could find was from 1822 and many people died in the 1860’s.  It was interesting to see the different faiths and symbols displayed on the headstones.  Some of the them were unfamiliar to us.

This person was a Mason, a Jew, and what else? If you know what the symbol is on the left, email!

The cemetery was well taken-care-of and a real joy to explore. It  reminded me of the Gilreath Cemetery (My mother’s family) in Holly Hill, Kentucky.  My ancestors deeded the land to the rest of the family.  Some say that slaves are buried around the edges of the cemetery.  I do not believe any slaves were buried in the Arrow Rock Cemetery.  Dr. Sappington had given land to the slaves for their cemetery a few miles down highway TT.

We loved biking this road!

Sappington has his own very ornate and elaborate cemetery near the old mansion.

More than slaves were buried at this cemetery.

Here is a very old headstone carved by someone who did not know how to carve! The name on it is Robert Banks! I could find no history on him.

Tom and I also stopped at the very little town of Blackwater on Highway K that is located just west of Arrow Rock.  It boasts 160 residents (Where were they?)  and Arrow Rock has only 56?  We were looking for a restaurant in which to dine on July 3 with long-time student assistant  and helpful editor Anne and her husband, Elliott.  All the restaurants in Arrow Rock were closed.

And the churches in Arrow Rock were closed too, even on Sunday! 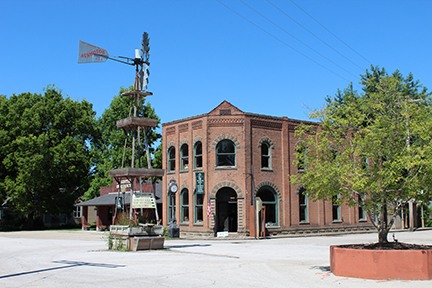 The family posing for a picture in Blackwater!

We were so lucky to hook up with Anne and Elliott in Blackwater.  Anne has been battling cancer for a year and recently recovered from surgery.  She was, of course, the best and brightest Student Assistant and editor who helped me at UCM!! and later.  Here they are!

How happy they are!  Oh, Twinkers is taking advantage of them!

If you haven’t visited Arrow Rock, take time to do it some day!  You learn so much about the history of our country and the people who live there are beyond kind!  We are so lucky to have a state and a national park system that sees the value in preserving the past as a way of educating all of us!!!!

Here is a a new candid camper for you.  This camper was created by its owner.  It appears to be a SUV.  He told us that it took him six months of work to make the thing work.  It has a fridge and all the amenities!

What a camper! The owners were from Kentucky.

As always, this post is copyrighted by Marla J. Selvidge.