The Kohler Kingdom and a Renegade Catholic Priest

Tom is sitting a bridge that was the bed of an old train car. How creative!

DeLaval gifted Tom two rounds of golf for both of us at Whistling Straights in Wisconsin when he left the company. (Thank you DeLaval and boss, Tony.) Click on Whistling Straights to view courses, and of course, rates that will shock your socks off.

This is the impressive image designed for Black Wolf Run!

We played the Meadows Valley and were going to play the Irish, but rain cancelled our second round. Before the golf, I argued with Tom to turn in the gifts for the cash. We could play several rounds of golf at local courses with the money. I did not know the reputation of the courses. But Tom did, and he wanted to play some of the best courses in the country.

Think of yourself tooling down this fairway.

A copper river ran through the golf course!

This cottage housed the restrooms on the course. No porta-potties for us!

In the middle of play at Meadows (our first course), we heard tornado sirens and then thunder forced us off the course.

During the lull in action, we had to hang out at the Black Wolf Run ClubHouse. So we toured around the pro-facility. It had more clothing and doo-dads than I have ever seen at a golf course. Tom looked at a windbreaker for $400 and golf shirts started at $95. Certainly the “brand” was well-known to a lot of people (other than me) or they couldn’t charge that much for the “stuff.” I think we would have to rent out our RV in order to purchase anything at that course!!!

Whistling Straights is owned by Kohler. Wait a minute? Do they make toilets and restroom furniture? Yes, this is the same Kohler. Kohler is king near Sheboygan. They own hotels and just about anything else you could think of that would make money. What an experience! just being in the aura of Kohler. Next time, when we go back for our second round, we will investigate some of the Kohler factories.

So cool! The old growth forest was amazing!

During our stay at Kohler-Andrae State Park (Yes, the very same Kohler.) we discovered the Sheboygan Indian Mound Park. Right in the middle of a neighborhood of houses, the enlightened garden club of Sheboygan preserved these mounds.

We have seen many different types of burial mounds, even on the island of Hokkaido, Japan, but these mounds were very different. They were not round but in the image of many different animals. As you toured the park, they outlined each mound and its animal figure. No one knows why there are images of animals above the graves. I wonder if they believed that they would be the “animal” in their next life? 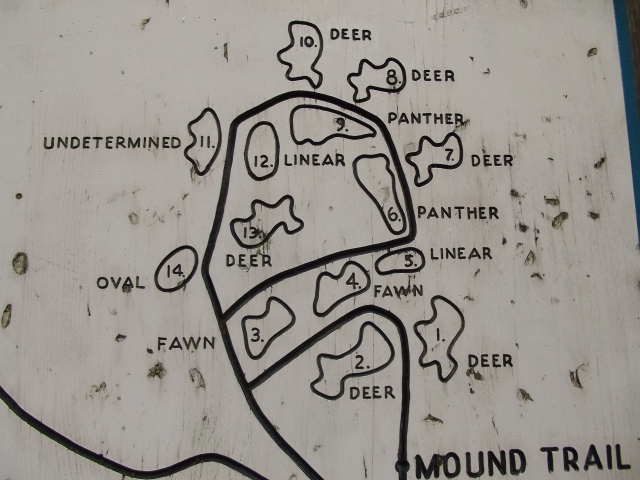 Here is an outline the site with outlines of the animal mounds!

We are in Wisconsin and both Tom and I wanted to buy local fresh cheese. We found a store in Gibbsville.  Gibbsville is in the middle of farm country. Tom purchased enough cheese to feed us for a year. It is always a treat to visit a cheese plant and watch the manufacturing of cheese.

Look at all that cheese!

Before I met Tom, I rarely ate cheese –oh maybe those single slices by Kraft–now, I am a cheese head too!

We had very interesting experiences as we trucked around Wisconsin. In Reedsville we stopped to compare two churches that were just blocks apart but looked exactly the same from the road. This led us to explore a cemetery with graves dating back to 1830. In Two Rivers we took a break to appreciate Lake Michigan which seemed to stretch all the way to the ends of the earth. Water and sky blended together.  We even learned about a renegade Catholic priest who left Germany to begin a commune in Wisconsin.

St. Nazianz was organized in 1854 as a religious colony by a group of German immigrants, led by Father Ambrose Oschwald, a Roman Catholic priest. The first settlers in the Oschwald group numbered 113 and came to the United States from the Black Forest of Baden, Germany, seeking religious freedom. (Wikipedia)

And along the route, we scanned properties wondering if we would move to Wisconsin or buy a summer place some day.

As always this post is copyrighted by Marla J. Selvidge.