A Taste of the Netherlands in Pella, Iowa

Delft Pottery from the Netherlands!

We are camping at Army Corps of Engineer’s campgrounds as we head north. Last night we stayed at Dam Overlook at Lake Red Rock in Iowa which cost $8.00. It was a very peaceful place. 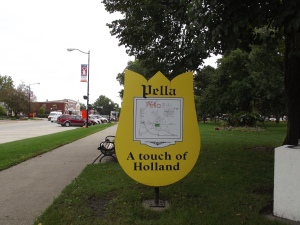 There were no tulips today!

Nearby was the Dutch city of Pella. We just had a window replaced in our Hearth room, and it was a Pella!! Go figure!  This is the place where they manufactured it.

A replica of a city in Holland!

They even preserved an old Masonic Temple. My father was a Mason.

We had read a little bit about the taste of Dutch country in Pella, but did not realize how beautiful it was. It was a lot of fun eating pastries at the Jaarsma Bakery and touring the town. Tom bought Dutch bologna and I bought a Delft set of cups!

At one time, the largest Windmill in the USA was in Pella.

Tom and I have both been to the Netherlands, and the architecture of this little town certainly reflects Holland. Like Holland, Michigan they have a tulip festival every year. What a treat–in the middle of Iowa!

North of Iowa City is Coralville with a Devonian Fossil Gorge. We were pleased to discover that the fossil beds were right next to the Dam Complex campground where we are staying– ($10 a night.) The dam was built by the Army Corps in 1958.

In 1993, there was a huge flood that lasted for almost a month and it ripped a campground right off its foundation. The flood uncovered millions/billions of fossils. Then, another flood happened in 2008 that swept away those fossils and uncovered other fossils. The fossil bed today is about a 100 feet deep so it should last many more storms.

What a nice place to camp! Thanks to the Army Corps!

We loved following the fossil trail. The Army Corps and friends have created an audio tour you can access on your phone. It was like having a personal guide with us! We were tempted to bring some of the fossils home, but like good troopers we left them for others to see! This is a great spot to vacation with family and friends. High above us is a beautiful beach and the dam with a visitor’s center!

Coming on 9/20/16 will be a post entitled “Cruise Crunchies!”  This is a piece about what not to do on a cruise and it contains some really funny “don’ts” and observations of passengers over the last 25 years!  If you have ever cruised or want to cruise, you might like to read this piece. 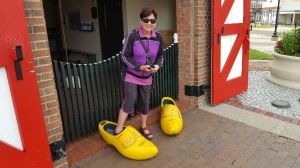 And Marla bought a new pair of shoes! He he!

This entry was posted in Camping, Discounts on campgrounds, Iowa, Rving across America and tagged Camping in Iowa, Devonian Fossil Gorge, Fossils in America, Pella and Dutch Country. Bookmark the permalink.