Navigating Hubbard Glacier from the Bridge

Turning Back Toward Vancouver

My first time working from the bridge of a cruise ship.

The last day of the first cruise is upon us. In high seas we entered Yakutat Bay heading for Hubbard Glacier. It looks out over Disenchantment Bay, rising 300 feet above sea level and settling at the bottom of the bay at 1300 feet. Hubbard is 75 miles long and six miles wide. It begins at the top of Mount Elias at 18K feet.

My task early this morning was to help 2,000 passengers (800 employees) on the ship to understand the experience of visiting Hubbard. Tom and I were escorted to the bridge where I was given a microphone. That was it. They handed me a microphone and my voice began to arrest people out of bed and onto the decks. Tom stood by with his binoculars with helpful hints to discuss as we made our way through Disenchantment Bay. 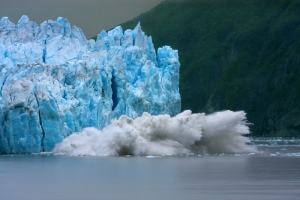 Hubbard Glacier calving. This is the longest tidewater glacier in Alaska, and its open calving face is over ten kilometers (6 miles) wide. The face rises an average of about 200 meters (600 feet) above the water (Disenchantment Bay). The ice chuck that just fell and produced this splash was over 100 meters (300 feet) high, or the height of a 25-story building. The glacier routinely calves off icebergs the size of a ten-story building.

So for almost three hours I helped the passengers to understand the history, politics, and activities of the Hubbard. The grand experience of a glacier is in its calving. This is when tons of ice fall off the face of the glacier into the bay. Calving could be caused by a number of influences like global warming. But…Hubbard is not receding, it is growing almost 80 feet a day.

While doing the research for my presentations on the ship, I was mindful of First Nations always, because the land was taken from them by the Russians and later sold to the United States around 1859. You know, “Seward’s Folly.”

Archaeologists have discovered several seal camps and evidence of occupation by the Yakatat Tlingits that goes back to the 18th century. This research done by the National Science Foundation will allow them to claim ownership and also reparation funds from the federal government.

Passengers were ecstatic. Even in the rain, they were making signs of hugging the glacier. We talked about ice worms, ice fleas, scientific expeditions to study Hubbard, types of glaciers, the blockage of Russel Fjord by Hubbard, the great flood, and the blue color of glaciers. 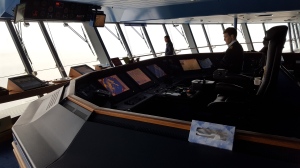 The bridge is high-tech with sonar and radar and much, much, more!

The bridge was staffed with many people including the Captain, two additional pilots, and a man with binoculars that kept his eyes peeled on the icebergs floating around us. It was a unique experience. Later the ship’s activities’ assistant called and complimented me on my narration. While finally eating breakfast at 10:30 a.m. we learned that my next presentation on Skagway had been moved to 11:15. We scrambled.

I did not know that I would have to narrate on the bridge and … now, I will have to do it again in a couple of days. We are so fortunate that Royal Caribbean invited me to lecture and experience not only Alaska once again, but competent and courteous people on the bridge of our ship. What a week! What a challenge! Tomorrow we rent a car and revisit some of the roads we have traveled in an RV north of Seward.

Today we stopped at the new Seward Library before heading back to the ship.  They have free WI-FI!  We also rented a car and made a pilgrimage to Portage Valley and the Blue Ice Trail —our favorite place to camp—in the whole world!!!

As we make the turn at Seward, we will retrace our ports again, heading back to Vancouver. Future posts will combine those days together as we visit, Juneau, Ketchikan, Skagway, Hoonah, and more.

As a way of ending this blog, I would like to share a thought from a Yakatat Tlingit.

Hubbard Glacier “became the caretakers of these foreign people that were coming down to settle upon [our] land…. It was a foreign country. They didn’t know how to live. The spirits of that place adopted them. They adopted the young ones. They showed them in spirit how to hunt seal and they became part of that glacier. They became friends of the spirit of the glacier.” The Tlingits call Hubbard Sit’ Tlein.

As always, this post is copyrighted by Marla j. Selvidge