Day one of Heading into the Sun

What a beautiful day!  We finished chores ahead of schedule so Tom decided to head out for Arrow Rock.  Arrow Rock is one of the first places we took our 24′ Fleetwood.  It is both a National and State Park/Monument/whatever!  It is a great place to spend a weekend!  There is plenty of space for camping with 30/50 hookups! 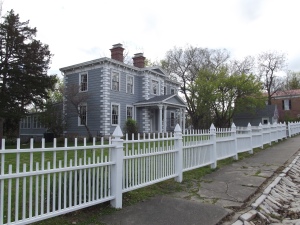 Today the town was peaceful.  Tourist season has only begun.  We walked the empty streets and thought about what it might have been like to live here in 1829.  Eventually, the townspeople built sidewalks, a Tavern, a jail, a courthouse and more.

They prospered here because Arrow Rock was located on the Blackwater River and riverboats brought their goods to sell.  Their biggest problem was malaria-carrying mosquitos.  A local doctor invented quinine as the malaria-drug and saved the day. (I took quinine every day when in Sierra Leone as a 21-year-old.)

I like to take close-ups of textures and architecture in places we visit.  The following photo is of a tree that is infested with parasites, but its bark is gorgeous and it tells the story of the tree.  Next time you see a tree, come up close and look at the bark, you will instantly discover the history of the tree.

Walk the streets of Arrow Rock and you will see that the storm drains run right into the sidewalks. What kind of shoes did they wear?  Why did they build a drain like this?

We discovered a jail, or Calaboose, and tiny houses everywhere.  People today think tiny houses are new, but a lot of people in the 19th century lived in houses that look like sheds to us!

One of the best things about Arrow Rock is the fried chicken dinners served at the Tavern.  Unfortunately for us we arrived too late to join the feast.  As we head East with our trusty companion Twinkers, we are sad that we had to leave Hillary behind.  She is not completely house-trained yet, so she is staying at the spa until we return.  Isn’t she beautiful!

Tom is answering emails and pondering all the generous thoughts from his colleagues.  He wonders what he is going to do with all his wonderful clothing, now that he won’t have scads of meetings every week all over the globe.  Tomorrow, Illinois!

This entry was posted in Camping, Rving across America and tagged 19th Century Town, Arrow Rock, Retirement. Bookmark the permalink.